Some of you already followed our struggle to get everything set up, but now it’s done: World, this is Splatter. Splatter, say Hello World.

What you get is:

But there’s more to come! Of course we’ll fix any critical issues, but we also aim for new content via free updates. If all works out nicely, the next updates might bring you:

For that to work, we need your help. See that Facebook button down at the main page? Use it! Because when you spread the word about our game, we sell more copies and maybe can afford to continue working at the game. I’d love to do that.

The village map: sort of a “quest hub” where you can do side missions and dig up a few little secrets on the side. No shooting in this map, in fact you get your weapons taken away at the beginning and only get them back when you decide to leave. We played alot with small light sources to give the map a “Global Illumination” appearance, and I really like the outcome. 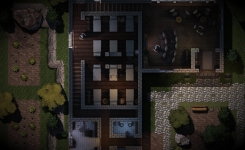 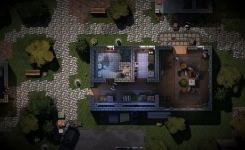 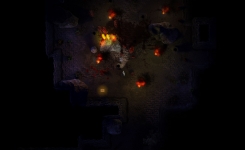 We implemented the first Arcade game mode: the classic survival mode with “endless waves of enemies” gameplay, but each map has a special feature that you can exploit for better scores. The final score is then transmitted to online leaderboards. We are currently building a little framework for this, and intend to publish it as OpenSource. Thomas is not that experienced in PHP/MySQL, thus we hope the publishing will improve the security and reliability of the framework. In the end we hope to achieve a framework that everyone can use to host her/his own leaderboards.

Our first gameplay trailer is now online! It shows two minutes of gameplay from the story mode and the deathmatch multiplayer mode, all set to the beat of the Splatter battle music. I hope you enjoy it!

What strange creatures you meet when you leave your home at the wrong time… one jumped at me when I passed a dark alley, the other threw stuff at me from across the street. I took pictures of both before I dismissed them with my shotgun – have a look at the Media page to view them.